How to Tackle Making a Pumpkin Pie like Amber -

Step One:
Plant and grow an awesome, but possibly excessive pumpkin patch. (The excessiveness is still being debated.)

Step Two:
Wait, somewhat impatiently, for pumpkins to ripen. (Or you can just wait till pumpkin season and go to the store and buy a pumpkin.) 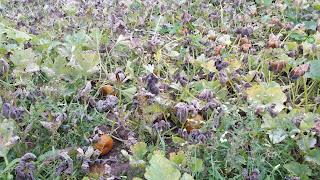 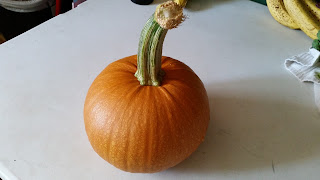 Step Four:
Decide medium size pumpkin may not be big enough and pick another small (about 2.5 lbs) pumpkin.

Step Six:
Search multiple recipes for pumpkin puree. Spend way too much time deciding which cooking method to use, then just put the pumpkins cut side down in a baking dish. 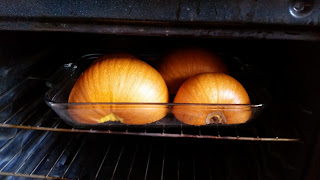 Step Seven:
Cook pumpkins at 400° for about 40 mins until easily pierced with a knife. 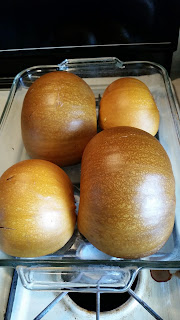 Step Eight:
Wait for, what seems like, EVER for pumpkins to cool after baking. Run out of time and put them in the fridge overnight.

Step Ten:
Use a big spoon to scrape the flesh from the pumpkin shells into a bowl. Let pumpkin sit on paper towel to remove excess water

Step Eleven:
Realize fresh pumpkin flesh is WAY stringier than the pumpkin puree from stores. Google to make sure something didn't go wrong. Realize it's fine and keep going.

Step Thirteen:
Attempt to squash the pumpkin through a collander to puree it and make it less stringy. Give up, and just smash the pumpkin in a bowl with a potato masher and a silicone scraper.

Step Sixteen:
Decide on a recipe to use as a base but then alter it to work with what you have on hand. 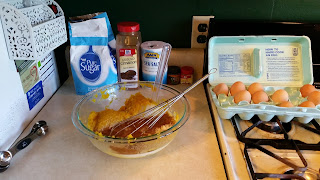 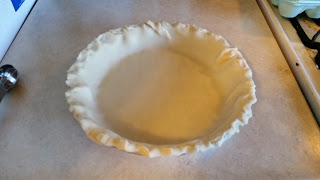 Step Nineteen:
Think you probably should have done this step before you made the pie filling. Then put premade dough into ungreased pie pan. Pinch edges so your pie looks somewhat presentable. 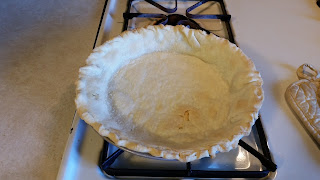 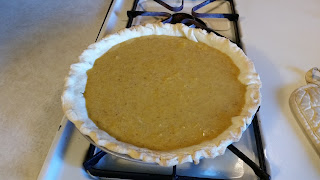 Step Twenty-One:
Turn oven down to 350°. Pour pie filling into crust. Place pie in oven. Bake for about 45 minutes or until a knife inserted in the middle comes out clean. 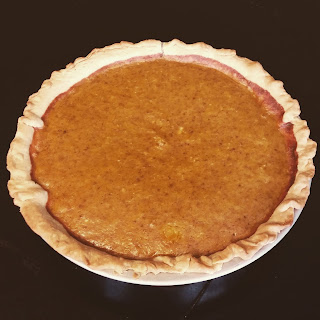 Step Twenty-Two:
Post pictures of finished product on social media, then let your husband dig in.

Step Twenty-Three:
Get a request for the recipe and decide it'd be fun to blog about it. Start labeling your steps and then regret it by step twelve. Decide there is no turning back, continue labeling the steps, and publish a blog post.

Step Twenty-Five:
Have your husband take the pie with him to work so you don't eat it all. Freeze excess pumpkin puree.


Posted by AmberTackles at 4:01 PM

Not valid for existing Diapers.com, Soap.com or BeautyBar.com customers. Some restrictions apply.